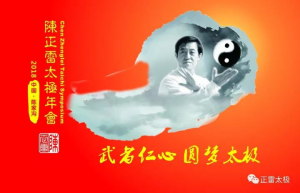 Foreword:
Taichi is a sport that utilizes the body language to manifest the balance of Yin and Yang. It is a sport created in accordance with the laws of nature and the human biological and psychological needs.
With a few hundred years of rich history, Taichi moves are smooth like flowing water with natural and relaxed postures. Taichi power is balanced with softness and solidness which enable it to be an exercise suitable for the whole body. Taichi is a popular sport yet it is also an intangible heritage that boosts our cultural self-confidence with its iconic Chinese cultural values.

Prelude:
Chen Zhenglei Taichi Annual Symposium follows the sixty-keyword theme of his lineage system – “De (德 Ethics), Cheng (诚 Honesty), Gong (公 Fairness), Xuan (宣 Openness), Ren (仁 Benevolence) …. After the last four well noted successful symposiums, the Fifth Symposium will be hosted in early summer at the Taichi birth place Chenjiagou under the keyword of Ren (仁 Benevolence).
“Zixia Said: Learning extensively yet with determined focus; inquiring with earnestness yet relating to current affairs, benevolence is in such a course.” – Confucian Analects
“The benevolent loves others.” – Mencius
As the old saying goes: Benevolence is the reason why humans are superior to all other creatures. For a martial artist, it is even more so!

Practicing Taichi can help one understand the Law of Taichi. One can harvest the fruit of health and happiness. A Taichi practitioner, loves him/herself, his/her family, nation and his/her country!

For hundreds of years, Taichi has attracted countless men and women with high standards of virtue to practice and develop this art. They were attracted to Taichi for its positive energy and the outstanding Chinese cultural self-confidence it represents. Presently, Taichi continues to function as a social activity to promote civilization and the metal and physical health of mankind.

There are over three hundred million Taichi practitioners in the world. In the world of Taichi, there is no division of races or states. Everyone practices the same art. Everyone enjoys the same equality, friendship and love! With the rapid advance of the Belt and Road project (一带一路), the story of China also includes the story of Taichi. The soft power of Chinese culture also includes the well-known art of Taichi!

Today, a group of Taichi inheritors and ambassadors are shining on the ever-great stage of a new era with their great talents! They are down to earth with lofty ideals. They are carrying on the nation’s rich tradition and showing the unyielding determination to realize “China Dream and Taichi Dream”.

The theme of the Fifth Chen Zhenglei Taichi Annual Symposium is “Realizing Taichi Dream with the heart of a Benevolent Warrior”. The Symposium is composed of four main sections: the Eighth China Chenjiagou Taichi Kungfu Elite Tournament; the Fourth “Dao of Taichi Forum” and “China Taichi Dream – 1000 Seminars in 100 Cities” Public Seminar; Taichi Painting and Calligraphy Exhibition and Chen Zhenglei Taichi Life Showcase; and the Twentieth International Chen’s Taichi Advanced Workshop. Chen Zhenglei Taichi Annual Symposium is a grand Taichi fest with worldwide recognition and participation. Grand Master Chen Zhenglei is one of first state recognized Intangible Cultural Inheritor representing Chen’s Taichi. He will take the lead hosting this Symposium from the beginning to the end. He will lead his elite team of Taichi instructors to share their knowledge of Taichi with Taichi enthusiasts from all over the world. We expected the number of participants to be another record high. Red is the theme color of this Symposium. It symbolizes the vigor and enthusiasm of the revitalization of the Chinese nation and the grand development of the art of Taichi!

● Opening Ceremony of the Fifth Chen Zhenglei Taichi Annual Symposium
The grand opening of Chen Zhenglei Taichi Annual Symposium is a cultural festival that attracts Taichi enthusiasts from all over the world. They come to the birth place of Taichi for the true source of Taichi to show respect to Taichi ancestors. Come and experience Taichi in person in this flourishing age!

● The Fourth “Dao of Taichi” Expert Forum and “China Taichi Dream – 1000 Seminars in 100 Cities” Public Seminar
Experts and scholars in culture studies, economics as well as Taichi from all over the country will gather at the “Dao of Taichi” Forum. They will speak on topics covering ancient and present times, Chinese and western, on culture, politics and economics. They will discuss how Taichi as a martial arts system as well as a culture can help realizing the China Dream in the grand scheme of Chinese health and cultural enterprises!

● The Eighth Chenjiagou Taichi Kungfu Elite Tournament
The tournament will include competition events in Chen (陈), Yang (杨), Wu (武), Wu (吴), Sun (孙), He (和) and other Taichi styles. The competition rules will follow the Standard National Competition Rules strictly. Push-hands events will be grouped according to gender and age. On top of personal awards, awards will also be given to group events and there are best athlete award and best team award. There will be financial reward for each competition event. (Specific details regarding rules of competition and methods, please check future publications.)

● “Charm of Taichi” Showcase and Taichi Masters Performances
Masters from the six main Taichi styles will show off their traditional Taichi skills at the Symposium.  You will have the opportunity to enjoy high level Taichi performances from the various style at the opening and closing ceremonies.

● The Completion of Chen Zhenglei Taichi Academy and Exhibition Hall, Taichi Painting and Calligraphy Exhibition and Chen Zhenglei Taichi Life Showcase
Chen Zhenglei Taichi Academy and Exhibition Hall is located at the scenic Taichi birth place Chenjigou in Wen County, Jiaozuo City. The structure is divided into southern and northern two courtyards. It is built in traditional Chinese style with a total construction area of 7,523.81 square meters. The environment is tranquil with quaint and elegant design. It is an ideal sanctuary to experience Taichi, discuss the way of live over a cup of tea and to nurture one’s mind and body.
The Taichi Painting and Calligraphy Exhibition will display over a hundred masterpieces from renowned artists from China and abroad. The artworks are tasteful with innovative themes, elegant style and positive intensions.
Chen Zhenglei Taichi Life Showcase is a multi-dimensional exhibition of materials such as videos, photos, books and live actions. The showcase will fully reflect Grand Master Chen Zhenglei’s seventy years of Taichi Life from his childhood life, his journey carrying on his family tradition, to his effort to spread Taichi, his social engagement as well as his charity works.

● Chinese Wushu Duanwei (Ranking) Examination
Chinese Wushu Duanwei is a ranking system sanctioned by the Chinese National Wushu Association for the purpose of full evaluation of a wushu practitioner’s skill level. It is a great means for wushu enthusiasts to self-evaluate and self-motivate for higher achievements. The Duanwei examination at the Fifth Chen Zhenglei Taichi Annual Symposium will be hosted by Henan Provincial Taichi Association which is sanctioned by the Chinese National Wushu Association to host 1 to 6 Duan examinations.

11. Youth Taichi (Old Frame Two) and Youth Instructor Training
Suitable for youth and those who aim to learn teaching methods for young students.

（3）Fees do not cover：
1. Accommodation (Symposium will help making arrangements)
2. Meals
3. Traffic to and from the Symposium
4. Examinations for Duanwei and Instructor Certificate

Registration and Information
A. On-line Registration
B. Register at the head office or branch institutes
C. Bank Transfer Account

※ For Information on Duanwei and Instructor Certificate Examination regarding fees and registration, please check WeChat and Official Website.