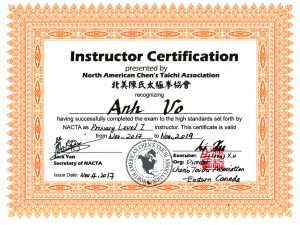 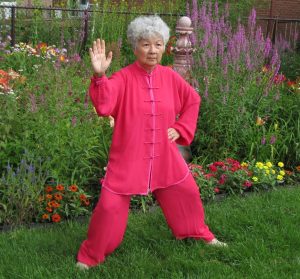 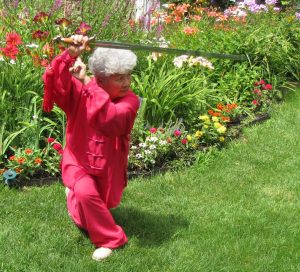 Anh is retired engineer, born in Viet Nam in 1952 and came to Canada in 1970.
She began studying and practicing different forms of Tai chi in 2003.
Member of the  International Yang Family Tai Chi Chuan Association since 2005, achieved rank 3 of this association in 2010. Studying with grand master Yang Jun by attending his seminars regularly from 2005 to 2012. Also studying with other teachers of this Association in Montreal area.
In 2009, she had an opportunity to learn 5 tai chi traditional styles from 5 chinese  grand masters who came from China and teached at Nashville’s Tai Chi symposium; that was when the dream of further studying Tai Chi Chen style was formed. At the beginning of 2013, the dream came true, she started studying Tai Chi Chen style with masters Leon Xu and Qian Zhou, disciples of grand master Chen Zhenglei.  In 2015, further studied with this Grand Master by participing in his seminars in Canada;  also became a Primary Level 1 Certified Instructor of the North American Chen’s Taichi Association.
Since 2008, she studied and practiced Zhineng Qigong with famous chinese masters, in China, in Europe, and in Malaysia.
Since 2000, she studied and practiced Ikebana with grand master Michelle Desjardins in Saint-Lambert, Qc.
She started teaching Ikebana, Tai Chi and Zhineng Qigong since 2006, 2007 and 2011 respectively.
In addition to these oriental arts, Anh is a voluntary interpreter for different organisms in Montreal South Shore area; and practices a variety of sports and activites such as swimming, skiing, figure skating, baladi and Indian classic dances, etc…