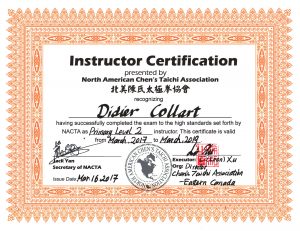 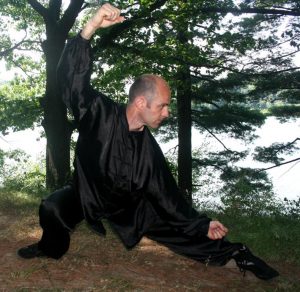 Didier Collart has been involved in physical and energetic oriental practices from its early age. He has progressively explored different way of practicing and discovered the scientific, philosophical, cultural and historical roots of these practices. The main points of interest of his experience are the effects of martial arts on health and well-being and the relations between spirit, mind and body.

He started practice martial arts from the age of 8. He was first introduced to Japanese martial arts like Judo (4 years), Shotokan Karate (4 years), Bozendo and Aikido. During this period, he also practiced different sports at competition level (triathlon, sailing, windsurfing and ski).

At the University of Sciences and Technics of Montpellier (France), he completed a master in Biology and Physiology in 1993 and received a national diploma of sport educator (BEES 1) in 1996 by the Ministry of Sports.

He is studying Cheng Baguazhang from 2013 with differents teachers (Ethan Murchie and his instructors, Master Liu Shuhang).

In 2013, he was certified as a Jianshen QiGong instructor for different classical routines (Yi Jin Jing, Liu Zi Jue…).

During all his life, he also experimented various other physical practises as Ashtanga Yoga, Hatha Yoga, breathing control techniques (Pranayama Yoga, free diving), stretching. He also had the opportunity to be introduced to many oriental cultural and spiritual activities such as calligraphy and chinese painting with Ngan Siu Miu and one of its instructor Danièle Grenier, meditation and mantras (Buddhist, Chan, Zen), tea ceremony, lion and dragon dance, reading writings of oriental great masters and classical boxing treaties…

He has studied chinese medicine as a full time student for 3 years at Rosemont College (Montréal) and graduated as a certified acupuncturist in spring 2016. He is also certified as a massage therapist in Traditional Chinese Medecine from 2012 and as a Qigong instructor by the International Qigong Federation in 2016.